Generally, citrus fruits such as mandarin orange and lemon are considered as fruits familiar with our life. Citrus greening disease is one of the diseases associated with citrus fruits such as mandarin oranges and lemons. It is an important disease of citrus fruits in tropical and subtropical regions, and is caused by bacterial infection. When infected, the leaves turn yellow and the fruit remains green. Infection spreads through transmission by Diaphorina citri (Asian citrus psyllid) and grafting.

Citrus greening disease (Citrus Huanglongbing; HLB) is an important disease of citrus in the tropical and subtropical regions of Asia, Africa, and the United States. It is caused by the microorganism Candidatus Liberibacter subspecies located in the phloem of citrus leaves, and in diseased trees, symptoms such as yellowing of leaves, defoliation, and poor coloration of fruits appear and eventually lead the plant to death. Citrus greening disease spread by psyllid (Diaphorina citri) and grafting infected branch. For which effective resistant cultivar and treatment methods have not been developed, it is regarded as a very serious disease, and a major problem in agricultural production in Japan, the United States, Brazil, Africa, and Southeast Asia. In Japan, the Plant Protection Law prohibits the transmission of citrus seedlings from designated areas.
Early detection and removal of diseased trees is indispensable to prevent the spread of the disease, but the symptom of citrus greening disease is very similar to element deficiency symptoms and difficult to judge by visual observation. Since the cultivation of Ca. L. asiaticus in an artificial medium has not been established to date and there is no effective serum or antibody, nucleic acid amplification tests using the PCR method or LAMP method are performed for the detection of the microorganism. 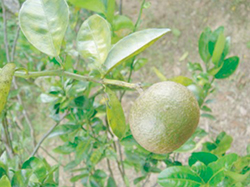 In diseased citrus, the leaves are yellowed, malformed and miniaturized, and the fruit does not turn yellow.