It can cause you trouble when your hydrangea does not color like ordinary years, or stays green even though the flowers are in bloom. In such case, your plant could have a disease called hydrangea phyllody disease, caused by Phytoplasma.
Phytoplasma disease, including hydrangea phyllody disease, is caused by microorganism called “Phytoplasma” parasitic on plants. This microorganism is transmitted by insects such as leafhoppers and is also infected by vegetative propagation such as grafting.
Typical examples that caused by Phytoplasma are Hydrangea phyllody disease that affects hydrangea, and witches’ broom that affects sweet potatoes.
In tropical regions, Phytoplasma has become problematic by infecting coconut palms dying from Phytoplasma disease that has severe effects on people’s daily life.
If a plant is infected with phytoplasma disease, it will die within a few years, and if left untreated, the infection will spread around the infected plant.
Therefore, control measures such as removal of infected plants are important.
Nippon Gene has a lineup of kits that offer the detection of phytoplasma with simple diagnostic techniques. 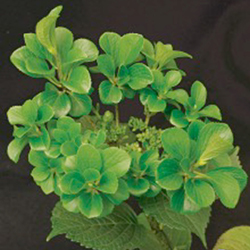 Phytoplasma is a phytopathogenic bacterium that parasitizes the phloem of plants, and was first discovered in Japan in 1967 in Japan. Over 700 types of plants in the world and about 80 types of plants in Japan are infected, causing malformation symptoms such as yellowing, dwarf, crowding, penetration, phyllody, and witches’ broom. Phytoplasma is transmitted through insect vectors, vegetative growth of grafting, etc., and an extremely important plant pathogen for agriculture.
In order to prevent the spread of damage caused by phytoplasma, it is necessary to take control measures such as removal of infected plants.
For that purpose, early detection of diseased plants is indispensable, but because phytoplasma is a microorganism that is difficult to culture, there were no simple diagnostic technique established.
Nippon Gene offer “Phytoplasma Universal Detection Kit”. By using the Phytoplasma Universal Detection Kit, it is possible to comprehensively detect phytoplasma from your plant with simple procedure.

This product is a dry reagent version of Phytoplasma Universal Detection Kit.
Nippon Gene material’s reagent drying technology has made it possible to transport and store the kit at room temperature, to supply and use it in all parts of the world.
LAMP method is employed for sample DNA amplification, and comprehensive detection of phytoplasma belonging to the class Mollicutes is possible.