What is the LAMP-FLP method?

What is the LAMP-FLP method?

The LAMP-FLP method, which won the Minister of Education, Culture, Sports, Science and Technology Award at the Chubu Regional Invention Award in FY2020, is a technology expected to be used in various fields such as medical practice and agriculture. Here we would like to explain in as easy a way as possible how gene polymorphism analysis can be performed.

DNA is said to be a blueprint for making the body of an organism.
This DNA is composed of four types of bases: adenine (A), guanine (G), cytosine (C), and thymine (T). In humans, 3 billion bases of information are stored in a single cell as a blueprint.
The information in this blueprint, differs slightly from person to person, and this also affects differences in one’s constitution such as tolerance against alcohol.

After drinking, the alcohol is metabolized to acetaldehyde, which is a harmful substance that causes sickness, by the action of enzymes in the body. Aldehyde dehydrogenase-2 (ALDH2) is also used to degrade the acetaldehyde.
When a specific part of the sequence of the ALDH2 gene is replaced from G (guanine) to A (adenine), acetaldehyde cannot be degraded. If it is the case, you have a constitution vulnerable to alcohol.
The replacement of a single nucleotide sequence by alternate nucleotide is called a single nucleotide polymorphism (SNP). The polymorphism also occurs in various other genes.
Since this single nucleotide polymorphism (SNP) is also related to its efficacy in medicine, tailor-made medicine and other medicine have been conducted to provide medicine tailored to the individual’s constitution in recent years.

Single nucleotide polymorphisms (SNPs) are also present in bacteria and others, and the existence of plant disease-causing bacteria that are resistant to pesticides, which are associated with mutation, is now becoming a problem in the agricultural field.

The LAMP-FLP method, which we developed, is a technology that can quickly and easily detect differences in the properties of organisms due to single nucleotide polymorphisms (SNPs), and is expected to be active in various fields such as clinical practice and agriculture.

So, here we would like to present how the LAMP-FLP method detects single nucleotide polymorphisms (SNPs).

In the LAMP-FLP method, the first step is to amplify DNA by the LAMP method.

The LAMP method is a DNA amplification method developed by Eiken Chemical Co., Ltd., and can amplify DNA exponentially by isothermal reaction using four (or six) types of primers and strand displacement type DNA polymerase.
It is key point for the LAMP-FLP method to design the probe and primers so that a DNA probe modified with a quencher substance is placed in a single nucleotide polymorphism (SNP) region, and a loop primer modified with a fluorescent substance is placed adjacent to the quencher substance. (Point 1)

A fine analysis of the correlation between the fluorescence intensity of the fluorescent substance and the temperature gradient shows the following melting curve analysis graph.

In order to analyze single nucleotide polymorphisms (SNPs) by the LAMP-FLP method, a device capable of controlling the temperature and monitoring the fluorescent substances is required. 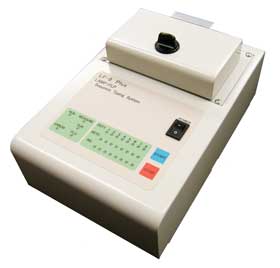 LF-8 Plus, a measuring instrument for the LAMP method

The LF-8 Plus is equipped with two types of sensors measuring turbidity and fluorescence. The turbidity sensor checks whether the LAMP-FLP method “Step 1: DNA amplification by LAMP method” successfully reacted (checks if the reaction solution is cloudy because the reaction solution becomes cloudy when DNA is amplified by the LAMP method).
In addition, the fluorescence sensor confirms the change in fluorescence intensity by “Step 2: Association Curve Analysis” of the LAMP-FLP method.
If you preset a program in the LF-8 Plus beforehand, you can easily analyze single nucleotide polymorphisms (SNPs) by simply pressing the start button.

See the following for related products and related articles.
Nippon Gene Co. Ltd. received the Minister of Education, Culture, Sports, Science and Technology Award at the Chubu Regional Invention AwardDNA Amplification Reagents Kit for LAMP-FLPLF-8 Plus, a measuring device for the LAMP method