We received the Minister of Education, Culture, Sports, Science and Technology Award, the highest award, at the Chubu Regional Invention Award in 2020.
The LAMP-FLP method, which was awarded this time, has been developed for use in the clinical field. Recently, it has also been applied to the rapid detection of drug-resistant bacteria against pesticides in the agricultural field, making it a technology that is expected to be used in various fields.

At the Chubu Regional Invention Award of Japan Institute of Invention and Innovation, we received the Minister of Education, Culture, Sports, Science and Technology Award of the highest prize for our “Identification and use of genetic polymorphisms”.
The Regional Invention Award is awarded to those who have completed, implemented, instructed, encouraged, and nurtured excellent inventions in local communities in eight blocks nationwide. Nippon Gene, a company in Toyama Prefecture, received the award in the Chubu region. 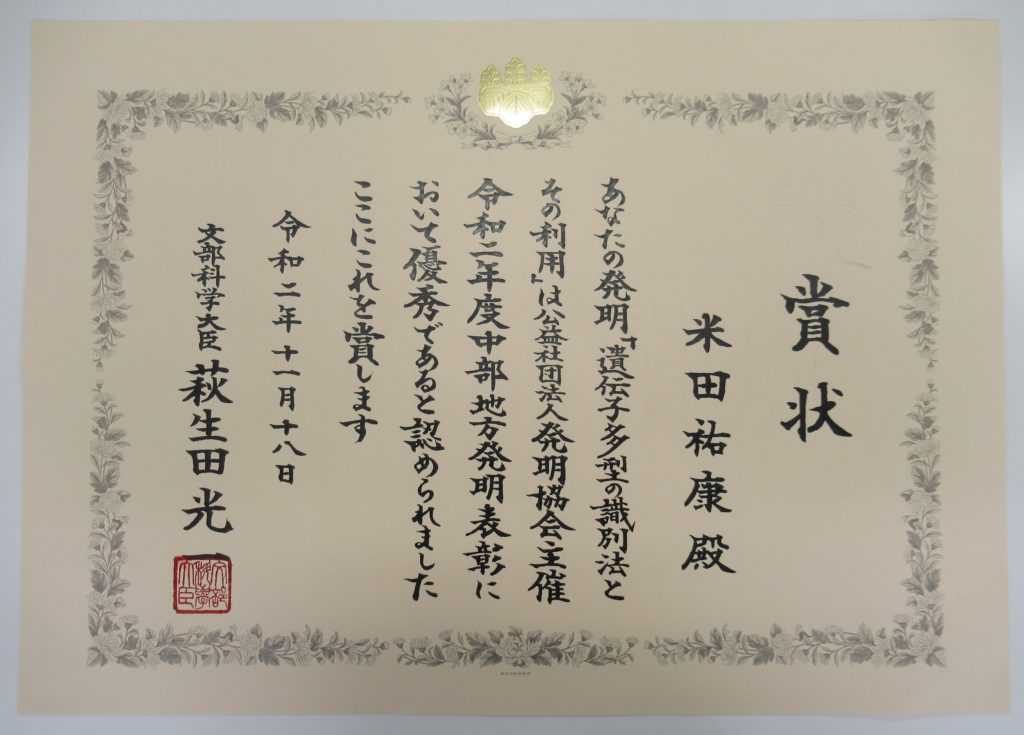 The LAMP-FLP method, which was awarded, is a technique capable of detecting single nucleotide polymorphisms (SNPs) quickly and easily. It also contributes to the development of companion diagnostics for the realization of individualized medicine.
For example, for drugs for the treatment of human hepatitis C, genotyping can diagnose the patients whom the drug may or may not be effective. To realize such diagnostics, LAMP-FLP can be used to easily distinguish the genotype from a single hair.
(Current treatment of human hepatitis C involves the use of therapeutics that are highly effective by anyone regardless of genotype.)

In the field of agriculture, the existence of drug-resistant bacteria due to gene mutations has become a problem. However, LAMP-FLP methods that can rapidly distinguish single nucleotide polymorphisms (SNPs) can be used to quickly and easily detect drug-sensitive and resistant strains.

Thus, the LAMP-FLP method is expected to be used not only in clinical practice but also in various fields.